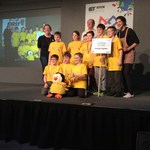 Ennerdale Engineers travelled to Bristol on February 26th to take part in the UK and Ireland National Lego League Final for teams of children aged 9 to 16. A steady first two rounds in the robot performance matches saw them just outside the top 10. A stunning third round though saw them catapulted into second place with only a few more teams to go. An anxious wait was ended with he announcement at the awards ceremony that the runners up spot was theirs and as a result they have been invited to the European and International Finals where the top 100 teams from over 30,000 worldwide will gather for 4 days of competition later this year. This is a stunning achievement for any team but even more so for Ennerdale who had both the youngest team members and were from the smallest school present at the UK Final. A massive well done to the whole team who performed magnificently on the day, Europe here we come!